There’s no beating about the bush with Picklive. When you access their landing page you’re presented with a short video tutorial, a link to their game rules and a ‘Play Now’ button which allows you to create your account by filling in your details as directed. Picklive only offers contests on individual matches so choose from any of the available ‘rooms’ as they refer to them and then select you line-up.

The competition lobby gives you the option to view upcoming games, matches in-progress or completed matches. All matches are created automatically so there is no need to create your own contests. Listed under each match will be a number of available rooms which will have their own entrance fee, number of allowed entries and prize structures. Free rolls will be listed here too.

Second Half contests are also available giving customers the chance to get involved should they miss the start of a game for whatever reason.

Unlike traditional fantasy football where you need to draft a full squad Picklive only requires you to select 5 players and there is no salary cap to worry about. The site lists projected line-ups and will release the confirmed line-ups around 1 hour before the contest once they are released. You will have 2 substitutes available once a contest gets under way in addition to having any player you choose automatically replaced by the oncoming player should he be subbed. There is a 3 minute delay before any substitute you initiate takes effect. 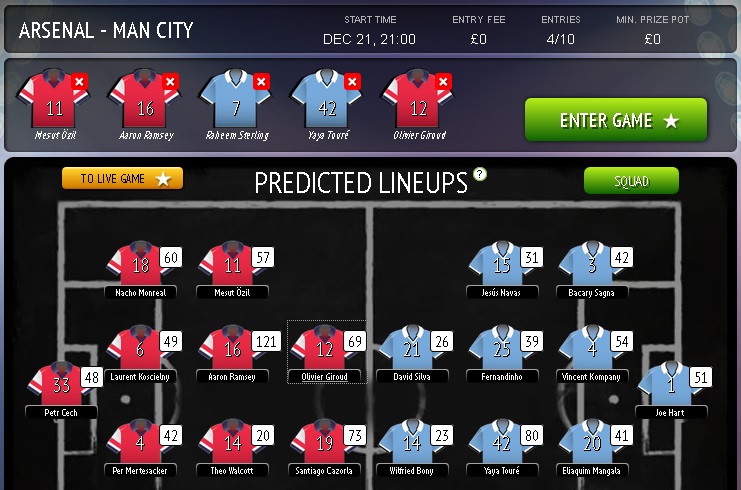 You must select at least one player from each side and if you choose a player that isn’t included in the starting line-up he will automatically be replaced by the player with the highest average score for the last 3 matches.

Picklive is quite big on leader-board recognition and accolades with podium positions displaying final rankings and prize money won where applicable. Prize allocation depends on number of players in the room.

Points are awarded based on a player’s contribution in the match and can be either positive or negative.